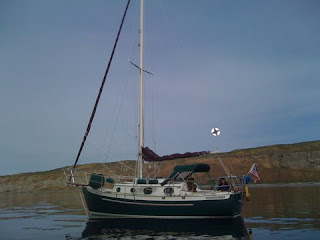 At Protection Island. There are puffins here! Sent from my iPhone
Posted by Karen Sullivan and Jim Heumann at 2:31 PM 1 comment:

Postcard from the Ocean Road 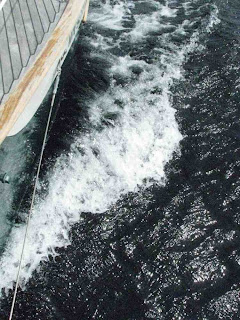 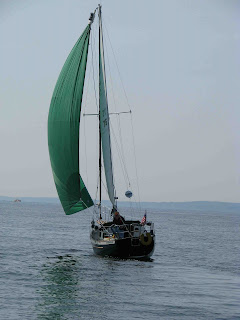 Annnnnd, they’re off! Bet you were wondering if we’d really go, didn’t you? With our original departure date of May first come and gone like an ice cream cone in an August Sahara, we were wondering, too. But now all the work is done… well, all that we couldn’t put off until fall, that is. And we, the doughty Sockdolagerians, are off! Off into the briny blue, the vasty deep, the bounding main, the billowy acres, the boggy drink, the watery world, the herring-pond, the trackless salt bath, the… oh Karen, just slam a bung in it and go, willya?

BTW, did we ever explain how Jim’s boat (pronounced ‘Sock-DOLL-a-jur) got its name? Originally called “Lucky Lady” (whooee, can you say Vegas, baby?) the name definitely had to go. Jim decided to pick one that would be completely original. Since he’s an experienced whitewater rafter and river rat, and since he’s a fan of history, he knew that the explorer John Wesley Powell had named the famous Sockdolager Rapids in the Grand Canyon of the Colorado River. He also knew that this word, widely used in the 1800s, had fallen out of use. Well, no more. There are several definitions for Sockdolager, but the one we associate with the boat, the rapids, and with John Wesley Powell’s intent is: “Outstanding!” as in, “THAT’S a real Sockdolager!” Something exceptional. Pay no attention to those other definitions, like the one about a bonk on the head. But now you know.

Dear Minstrel, our other Dana 24, is tucked safely into her slip for the summer, with friends watching over her until fall, when she comes alive again as Karen’s home! Karen’s house, site of many good musical feastings, is now the (rented) home of a friend known as Sue the Sailor, a new arrival to Port Townsend from Portland. Sue is known on the Columbia River for her awesome foredeck racing skills when she’s not busy being a wildlife biologist. (PT sailing locals take note.)

First on our route is a quick trip down-sound, to visit friends and rest up while we finalize plans. Then it’s out the Strait of Juan de Fuca, up the west coast of Vancouver Island, across Queen Charlotte Sound, and then we explore the Queen Charlotte Islands (the Haida Nation’s Gwaii Haanas) for five weeks! Coming home, we’ll probably sail through the Broughton Islands, traverse the rapids in the islands north of the Strait of Georgia, and stop in the San Juans before arriving back home in early September, just in time for the Wooden Boat Festival. Karen will then fetch Jack the doglet from his extended vacation in Alaska.

Yay! We’re off! Really. We’ll send you a note from somewhere down the ocean road when we have news and can find an internet connection.
Posted by Karen Sullivan and Jim Heumann at 8:06 AM 1 comment: 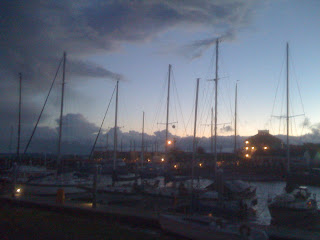 Jim here. I'm finding that it is quite possible to manufacture your own stress. I shouldn't whine I know, I'm retired. How stressful can it be? As stressful and you make it. All self imposed deadlines, with the goal of 3 1/2 months of sailing this summer. In the words of Vaughn Short "...it's your own damn fault if you have no fun". My goal is to have more fun every day as well as while off on a trip. The photo is of Point Hudson marina where I've been living since October. It's a great place. Here's to more fun.
Posted by Karen Sullivan and Jim Heumann at 9:03 PM No comments: 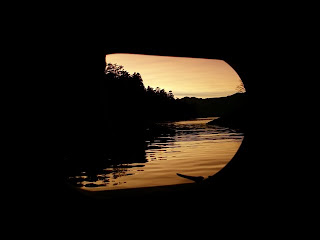 If you're new to this blog it might make more sense to click on "2009" under the Blog Archive, and start reading from the bottom.

"Nearly ready" is a euphemism, but we like to say that anyway. (Karen here.) There is a sense of final preparation in the air, as the major projects are behind us and it's now mostly small boat jobs and the schlepping of belongings from the house, which is rented to a friend for the summer. Oh, and painting, and... wait, don't get me started! There probably isn't a real finish line to preparing for something like this. More likely it'll be a sense of good enough, let's go. I think that sense may become apparent when we segue from thinking about the tasks at hand to the voyage itself being uppermost in our minds. I hope that's soon. When that happens, we'll probably just send you a quick email and go. The view right now is still from the porthole, not the cockpit. But the excitement is building, which means it won't be long now.
Posted by Karen Sullivan and Jim Heumann at 9:10 AM No comments: