Preparations for the Life of Reilly 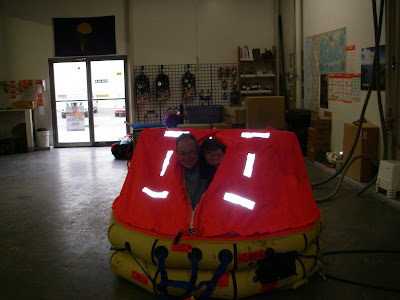 Several requests have come in asking what we’re doing these days to get ready to cast off for the Big Bodacious Voyage. “Geez,” they say when we start ticking off items on the To-Do list, “You’ve got lots of time!”

This causes the following immediate reaction: I freeze. Jim freezes. We look at each other. He dials up his iPhone’s “Number of Days Left Countdown” app. Cue the jangly music from the sand-running-out-of-the-hourglass scene in the Wizard of Oz where the Wicked Witch of the West cackles "Mwahh-Ha-Ha!" at wide-eyed Dorothy and her little dog, too. Jim announces how many days we have left. I can see the panic in his eyes. We both get that deer in the headlights look. This photo shows us practicing being cheerful castaways in our teensy but very well-constructed Winslow life raft. As part of the repack/inspection, we bought a couple hours of consultation time. One can never be too prepared--and time keeps on slipping, slipping, slipping...

Here’s a partial To-Do list. Most of these things have been done already, but enough of them remain to keep life these days anything but Reilly-like. Besides boat prep we’ve got a daunting list of house projects to get through to make it really nice for whoever rents it. Which reminds me, I need to go to the hardware store because I’ve run out of thinset for the tile backsplash…

To-Do List, or... What Some People Will Go Through Just to Act Like a Couple of Lazy Bums. Or... Who the heck was Reilly, Anyway?

Standing and running rigging—replace all, including sheaves where worn; convert boat to cutter rig with removable forestay, new mast tangs and running backstays.

Make sure all sheet/halyard leads are fair; re-rig roller furling with new blocks.

Rig reefing gear and boom vangs for maximum strength and ease of use.

Have sails (made in 2005) inspected/repaired as needed--mainsail, genoa, staysail, cruising spinnaker, storm trysail, storm staysail.) All made by Carol Hasse’s Port Townsend Sails. One more needed, a light air drifter. 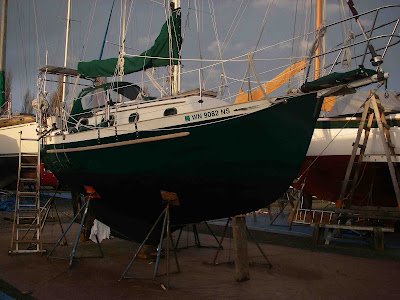