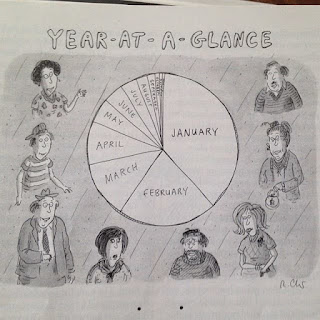 It’s the middle of winter, and once again we are astounded anew that water can actually freeze and behave so badly in gale-force winds. What happened to summer? And why, after living full-time on a 24-foot boat and crossing 10,000 miles of ocean, do we find the normally palatial digs of our 850 square-foot house confining?

This is the time of year when most of us make big offshore voyages and fun coastal cruises—in our minds. 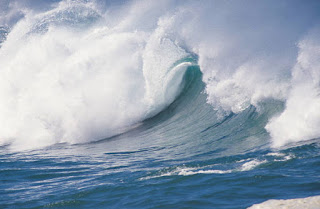 We browse online for off-season sales of boat equipment, and we concoct work plans that will fall apart like melting ice as soon as good weather hits.  Because, would you rather work on the boat or go boating? The adverbial clause sounds so much more action-oriented.

Meanwhile, we do things like walk the docks, stare at others’ boats while watching our frosty breath, we repair gizmos and make gilhickies in front of space heaters in our garages, and we plan for the next round of boat improvements. “Boat improvements” is the only phrase I know to have proven more potent than the previously most expensive four words on the planet: “While we’re at it…” 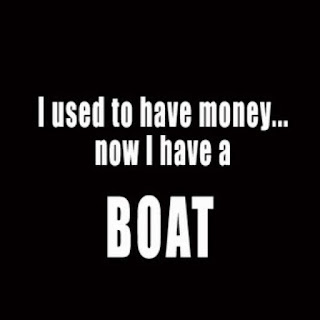 If you’ve been following this blog for any length of time, you know that Jim and I don’t have much self-control when it comes to boats, and, very likely, neither do you. It turns out there’s a name for this nautical affliction: OCHD. Our friend Steve Stone at Off Center Harbor, being the first to scientifically pin down this syndrome after years of study, has naturally named it for his company, which, if you recall the way stadiums are named for corporations, isn’t unusual except that this isn’t a stadium, it's an affliction. Oh well. Go, Steve. 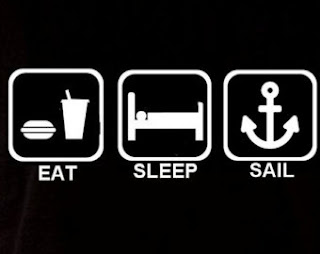 So, in light of this new name for it, Jim and I wish to say, “Hi, We are Karen and Jim, and we’re addicts.” 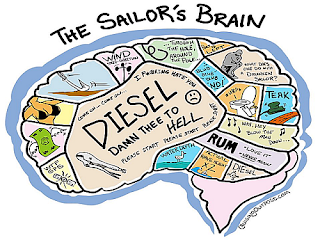 1. Did you ever name a pet something nautical?

As a kid, Jim had an English setter named “Boots.” He says this was a family dog name, but come on, what’s a sailor’s favorite footwear at sea? He also had a turtle named Nellie Belle; okay, what rounded bronze item do sailors like to ring?

My developing OCHD has been less subtle; I had a schnauzer named Sparks. Her full name was “Chief Petty Officer, Telegraphist Sparks, Royal Navy retired, SAH!” Being the ship’s radio officer, she was the reason I’d point to when people would ask, “Why don’t you keep your radio on all the time, I was trying to reach you.” I also taught her to salute. Yes, that’s possible with a dog. But how to do that is top secret. One day at a parade of sail in Alexandria, Virginia, a Vice Admiral came up to the boat and said, sotto voce and looking slightly embarrassed, “I, uh, hear that your, uh, dog, uh, salutes.” A small crowd of about 50 midshipmen gathered grinning around a quickly amassing row of officers whose brass was so bright I put on my sunglasses. “Yes,” I said, “she can salute.”

“Uh, er, well,” said the Admiral, “We were wondering if she would salute us.” He gestured down the row of Admirals, Generals, Captains and Colonels. Sparks saluted them, and you never saw so many brass-laden arms snap to hat brims so fast. The Admiral smiled and said, “Uh, would you consider coming to my home and teaching my dog to salute? I’d like to be saluted when I come through the door each day.” 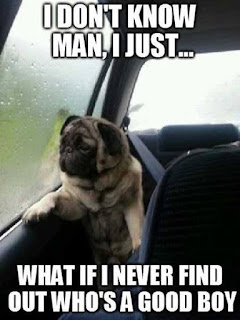 2. Do you dream about boats and sailing trips rather than working?
Well, duh.

3. Do you shop endlessly for boats (or boat items) online?
Being the epitome of nerdly boat geekness, Jim in no way can deny this. My OCHD predates online. Back in the Cretaceous period, the arrival of the Defender catalog, which was in tiny black-and-white letters on newsprint with even tinier photos, would trigger an extreme bout of OCHD. Obsessive poring would not begin to describe what I did over it for weeks on end, imagining where I would stow all that gear without sinking, and maybe I could take out a loan...

4. Is it harder to hear your spouse’s voice when you're around boats?
We both have OCHD, so we’re balanced.

5. Do you take long mental voyages without untying from the dock?
I myself have sailed across the Atlantic approximately ten thousand times, visiting all of its historic ports, including the Mediterranean—during the age of sail, which kind of passed me by a hundred years ago.

6. Do you spend hours fixing defects that are unnoticeable to others?
Now see here, this is getting a little personal, don’t you think? 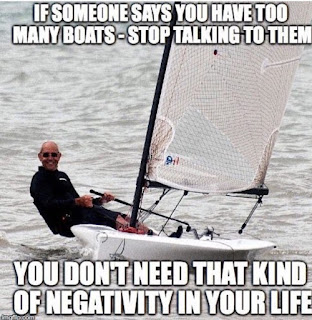 8. Do you have the ability to see boat equipment in store windows from half a mile away while simultaneously doing a U-turn faster than any landlubber can?
Of course you do. 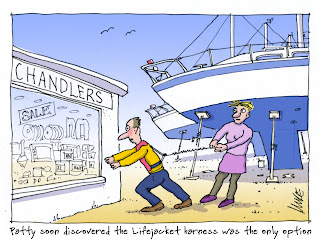 9. Do you have trouble with control of drool at boat festivals?
Ever wonder why boat people like to dress so casually? Ever wonder why pirates wear scarves? This is why.

10. Do you love the smell of Stockholm tar, varnish, teak oil, and other things that are supposed to be bad for you?
It’s not just that you love them, they transport you to an alternate reality. To heck with steak and lobster, these are the steeds you ride to olfactory bliss.


Treatment:
Steve has suggested that someone find a Twelve Step cure, but so far all that’s been found is that those twelve steps lead straight down the dock.

Hang in there, northern hemisphere peeps, the days are getting longer. 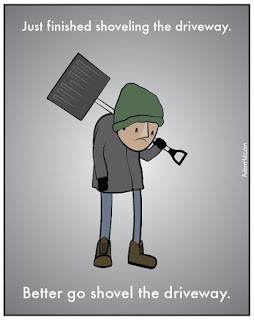 Posted by Karen Sullivan and Jim Heumann at 3:43 PM No comments: