It’s not like we’ve been a couple of lazy, lethargic, lily-livered, laggardly, lackadaisical landlubbers since the last post or anything, though the fast-paced land life and hard-hitting news coverage are things we’re still getting used to. 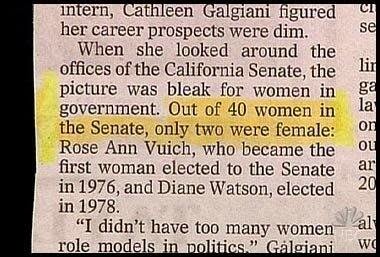 There's been boat maintenance - you know how you dig out old seams and re-caulk them and then sit back and say, hoo boy, we're watertight now, and then the ocean says oh no you're not? Before we left in 2011, we completely re-caulked the hull-to-deck seam, which stayed watertight throughout the voyage. It was the inside seam under the cap rail, in a very fiddly place, that gradually gave us more and more drips whenever the rail went under, which it did a lot coming north from California. Well, it's fixed now, as are escaped teak deck bungs, a couple of stanchions that needed re-bedding and a few other things.

There's been time spent with cruisers getting ready to head out. Two young couples, Matt and Megan aboard the 33-foot Daybreak, and Josh and Michele aboard a Northsea 27, are heading south to destinations to be discovered. We enjoyed visiting with them and talking about preparations on small boats, and we wish them fair winds and low seas.

Jim has been studying up on racing tactics while sailing on a friend’s Thunderbird in the Port Townsend Sailing Association’s race series, and they’ve become very competitive among the local fleet. We hosted a gathering of the Northwest Pacific Seacraft Owner’s Association at Poulsbo, raced on wooden boats in Port Townsend’s Classic Mariner’s Regatta, and gave slide show/talks at Seattle’s Center For Wooden Boats and the Navy Yacht Club at Everett.

We’ll also be giving a talk at the Wooden Boat Festival in early September. And we finally met Richard Hazelton, the editor of 48 North magazine, after all these years. About time! We all spent so much time spinning yarns and laughing that we're pretty sure he missed his deadline. 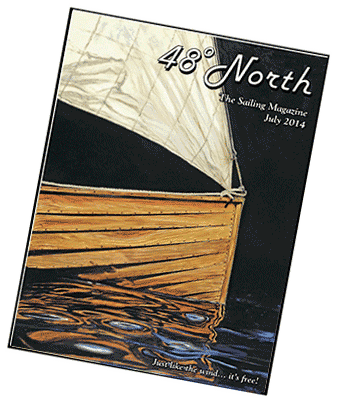 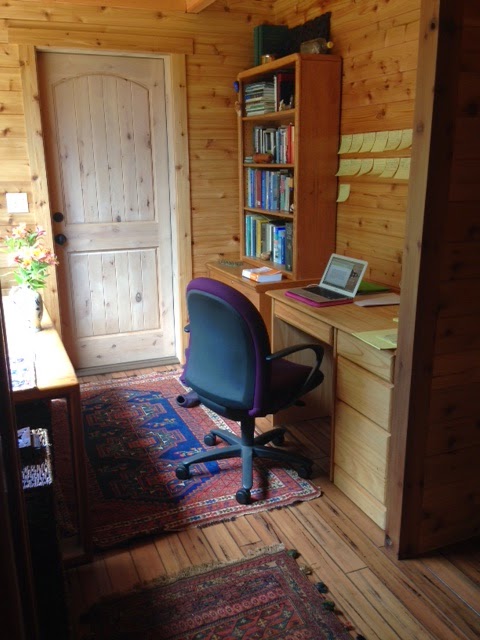 I finished the drawings, photos and articles for a six-part series to be published in Good Old Boat magazine, starting in September. The series is about how to make your boat and yourself ready for solo (or short-handed) sailing. It covers mental preparation, docking and undocking, sail changes, anchoring under power or sail from either upwind or downwind, how to cope when your anchor drags, and there’s an essay on the rewards of solitude. I’m excited about it. 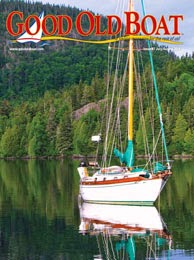 And in between helping a neighbor run for Congress on the Green Party ticket, I have been working every day on the book project about our voyage. 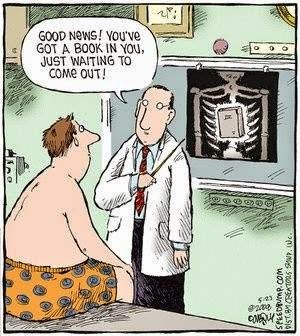 Sometimes things, as you write them, tell you how they need to be written. With my book, which began as an expansion of the voyage narratives featured this blog, I’m going into new territory, and learning that the creative process has many steps. 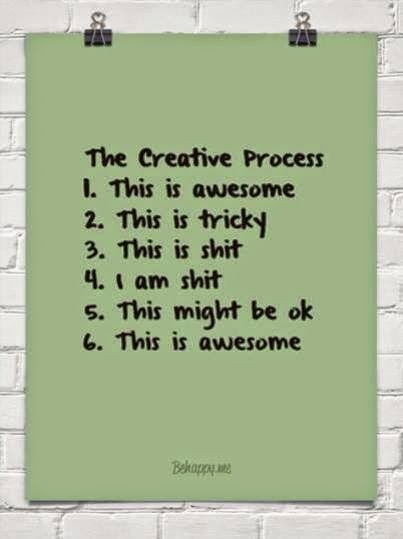 After reading the first seven draft chapters, Jim said, “I want to know why you wanted to cross an ocean. I want to know how many times you tried, and failed, and why you didn’t give up the dream.” So, okay, then. It’s going to be a memoir. I've sensed for awhile that it would need a more personal touch, but there will still be lots of practical things, like examples with illustrations on how we did certain tasks, and appendices with long lists on what we did to get the boat and ourselves ready, how we organized storage, what we put in our ditch bags, etc. I can’t project a finish date but am hoping to get a solid complete draft done by late autumn.

In the meantime I’ve badly neglected you, wonderful reader, but it’s kind of like that old parental admonition: "It’s for your own good, dear." Will you believe that? No? I don’t blame you. Okay, how about this: 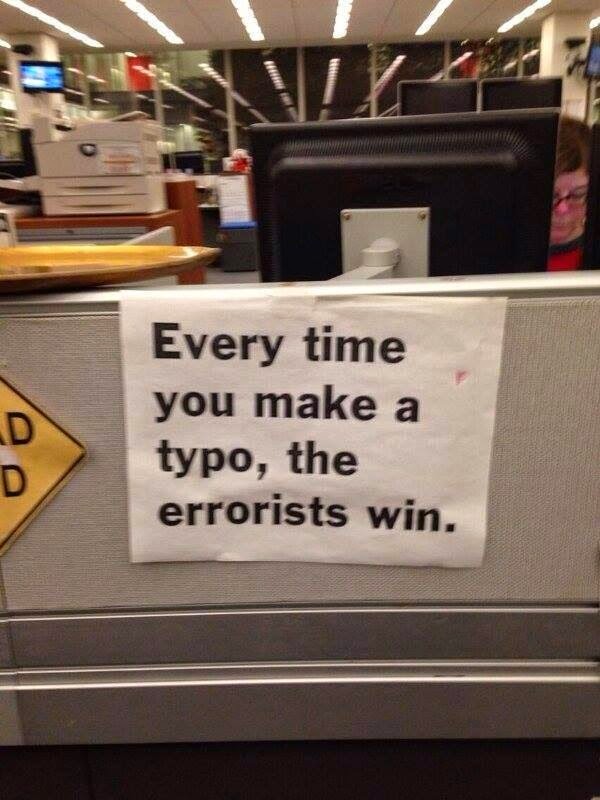 The Western Flyer is hauled out at Boat Haven in Port Townsend. This is the boat that took author John Steinbeck, biologist Ed Ricketts and a research team in 1940 from Monterey, California to Mexico, about which Steinbeck wrote the classic Sea of Cortez. A controversy rages between the current owner, who wants to cut the boat into pieces to reassemble in the lobby of his hotel, and the group that was trying to raise money to buy and restore it as a floating educational facility.  In the meantime, there she sits, barnacle-encrusted and rotting after sinking twice in the Swinomish channel.

Rumors fly about her being sliced up soon, but nobody knows. Personally, it makes me sad to think of a boat like this being cut up. We've seen too many examples. You have to go to three different places in California to see the sliced-off bow, stern and bones of the beautiful Galilee, an 1891-built brigantine that Port Townsend's Peter Quinn knew when his grandfather owned and lived aboard it in Sausalito. You have to go to a bookstore in Victoria, BC to see the remains of Trekka, the most famous small boat to ever circumnavigate. We don't know how or why a legendary boat on exhibit at the maritime museum in Victoria would go first to a shed, where Jim and I found her intact in 2010, and then to a hull without her keel in a bookstore display. And no one can ever see the fabled Tzu Hang, the Smeeton's red 46' ketch, ever again, because after falling into disrepair, she was bulldozed by a shipbreaker in Puerto Rico a day before the man who had finally raised the cash to rescue her arrived.

So we hope that the Western Flyer story ends well.

Far-flung friends are spanning the globe, literally. Jim sent congratulations to two women from Norway whom we met in French Polynesia. They recently crossed their track while re-crossing the Atlantic, to complete their circumnavigation. Congratulations to Camilla and Johanne aboard Flow!  Terrwyn, a Pacific Seacraft 37, is in South Africa awaiting her owners’ return. Meanwhile, her owners Bill and Cathy bought a Bristol Channel Cutter in British Columbia and are spending the northern summer sailing it before returning to Terrwyn. Hard core, guys.

Where is everybody? The fleet we first met in Mexico and left in New Zealand has moved on, too. The crew of Estrellita (Waquiez Pretorien 35, Livia and Carol) have been kitesurfing their brains out in French Polynesia from Gambier to Maupiti, and we think they're headed for the Marshall Islands for cyclone season. Southern Cross, an Ericson 38, is just about to leave Fiji for Vanuatu and Australia, where owners Mark and Vicki will sell her. Charisma (Tayana 37, Bob and Anne) and Orcinius (Lagoon 42, John and Lisa) are in Fiji, after a good trip for Charisma but a rough one for Orcinius, who met a gale near Minerva Reef. Remember these guys from Aitutaki, where we all went through the Mother of All Groundings?

Legacy (Catalina 38 with Rich and Cyndi) went back to Tonga, and Clover (Lapworth 36), with singlehander Shane aboard, is surfing his brains out in Fiji. Heading north to rendezvous with old friends in Fiji, Buena Vista (Peterson 46, Deb and Don) had a safe late-season passage. Arnamentia (Swan 47, Jon and Carol) is still in New Zealand enjoying a refit, Gato Go (40’ catamaran, Craig and Bruce) is back in Fiji, Luckness (Pacific Seacraft 37, singlehander Craig) left the Cook Islands and is enroute to Beveridge Reef, Peter and Kelsey aboard Privateer (Cape George 36) have blasted through the South Pacific and are in Tonga already, Richard and Allison aboard Vulcan Spirit (Halberg-Rassey 53) are in Australia, and Patrick and Kirsten aboard Silhouette (Cabo Rico 38) have finally arrived in Sitka, Alaska, after sailing from New Zealand via Rarotonga, Penhryn, Fanning and Hawaii. Their description of “Sailing the Pacific Roller-Coaster” between Hawaii and Alaska is one of the best I’ve read.

Finally, in the most impressive feat of all, a witty Irishman named Sam Davis, whom we first met in Bora Bora and who Jim got to know in Tonga, sailed his Rival 42, Suvretta, solo from Tonga to the Falklands via Cape Horn. After making repairs to damage he sustained in the Southern Ocean, he reached Ireland without incident. If anyone ought to write a blog or a book, it’s him.

There you have it. That’s a lot of sea-miles under those keels, folks.

Posted by Karen Sullivan and Jim Heumann at 3:22 PM 1 comment: