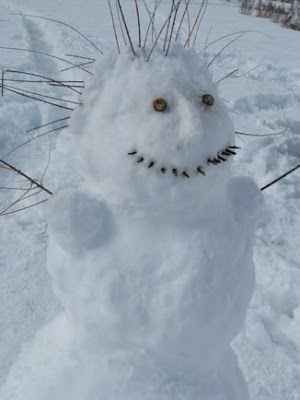 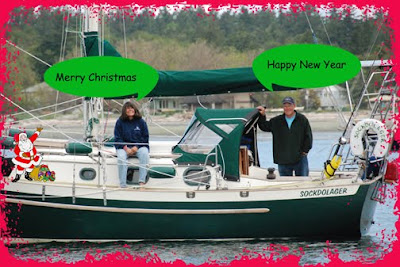 Happy holidays! Many tides have ebbed and flowed since last summer, and much preparation for the upcoming voyage has been completed. (Much remains, however.) The departure date is set: July 4, 2011, from Port Townsend, Washington to…well… the world!

Photo of Karen & Jim by Yasuo and Michiko Hayama, from Japan. Yasuo sailed his Dana 24 from California to Tokyo (http://www.cruisingyachtsinc.com/psc24dh.pdf)

Yes! We’re going for it! From PT we’ll sail to Neah Bay at the end of the Strait of Juan de Fuca, wait for a good forecast, and jump offshore for the passage to San Francisco, about 700 miles south. After a spell there (heads up, SF friends!) we’ll harbor-hop down the coast to southern California, where we’ll await the end of hurricane season. Then it’s down Baja Mexico to explore the Sea of Cortez and get the boat and ourselves ready for the big crossing in March of 2012: 2300 miles to the Marquesas, home of gorgeous mountainous islands, great people, and lots of history. We can hardly wait to ramble through French Polynesia and, before the South Pacific hurricane season starts, book it for New Zealand. (Heads up, EnZed friends!) Once in NZ we’ll take stock—you know, the how-are-we doing, is-this-still-fun stock. If it’s still fun, we’ll keep going. A friend named Kaci Cronkhite (who’s circumnavigated and is the longtime Executive Director of the Wooden Boat Festival) has been spinning yarns to us about the delights of the Indian Ocean. And we do have friends in South Africa…

We’ll keep you posted via this blog as we get internet connections along the way. There is also the new ability to update it from far out at sea anywhere in the world, via our new single sideband radio. Both of us are going to become Hams as well, so talking from just about anywhere in the world will be possible, as soon as we learn how to do that. We may even be able to send coordinates of where we are right to the blog via our solar-powered shortwave radio. HOLY MACKEREL, IS TECHNOLOGY GREAT OR WHAT.

Our boat, Sockdolager, (Sock-DOLL-a-jur) a Pacific Seacraft Dana 24, is, well, only 24 feet long. This would make things rather crowded with all of you aboard, so the best way we can think of to take you along is to blog about the voyage. Which brings up another thing… 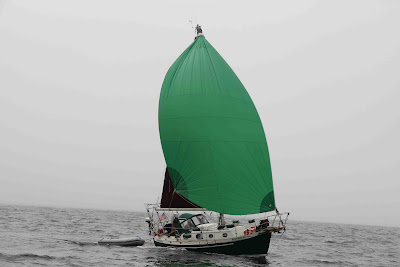 We GUARANTEE you won’t get seasick.
While we’ll be able to update the blog at sea from our shortwave radio, we won’t be able to notify YOU with an email, due to the cost and complexity of radio waves compared to internet electrons. We also can’t promise to update anything with any regularity, such as the blog or our position. Which means: don’t worry if you don’t hear from us for weeks at a time. We put a “Follow” widget on this blog to enable followers to get automatic notifications when we post via radio from the briny. Although we know beyond a doubt that each and every one of you is a leader, we recommend that you also try becoming a “Follower.” More on this with how-to instructions at: http://www.google.com/support/blogger/bin/answer.py?hl=en&answer=104226 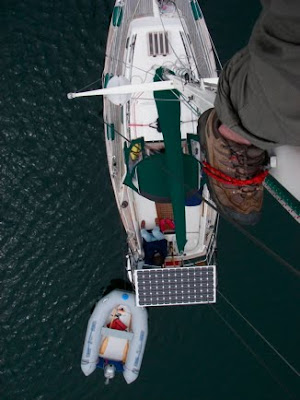 Talk back!
We’ve also figured out how to simplify the comments section at the end of each blog post—basically it’s open now to anyone for comment. We got rid of that byzantine registration thingy that previously prevented many of you from commenting. So fire at will, we want to keep in touch!

Good Old Boat and 48 North
Both magazines have published several humor articles by Karen this year. Our blog writings have become the ideas and raw materials for lots of these published pieces. Supposedly, writing for publication is like watching sausage being made. So if you love sausage, this may be your spot. 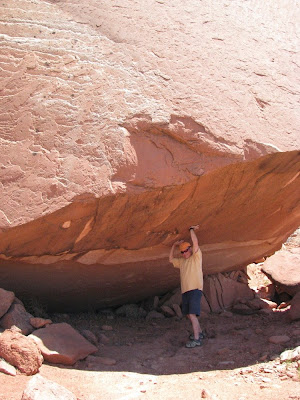 The man can do anything. And strong? Don't get me started...
Boat Bling
Sockdolager is getting ready for voyaging and is now solar-powered for all things electronic. Her rig, sails, and safety gear are either all new or inspected and good as new. She has a new Cape Horn self-steering vane gear, new dodger, cockpit awning, 175-watt solar panel on a stainless arch, special Odyssey batteries, water-cooled refrigeration, 110-volt inverter, Wi-fi antenna, a new Force 10 cook-stove, a new single sideband (long range) radio transmitter/receiver, GPS, and a new VHF (short range) radio with a cool gizmo that identifies ships by name and gives their coordinates (AIS.) Plus all new boat cushions and a new stereo system with an iPod dock. Karen, also known as the Navigatrix, has a refurbished Tamaya Jupiter sextant in case the electronics crap out.

Jim, also known as His Royal Geekness, has installed everything himself while contorting his body into odd, tiny spaces inside the boat. This practice will be familiar to some of you; it’s called “boat yoga.” Karen has watched him in slack-jawed amazement. There are now enough new antenna thingys on the boat to attract the interest of the CIA. Special note: if anyone ever tries to tell you that installing a single sideband radio (SSB) is easy, HAVE THEM IMMEDIATELY FLOGGED ROUND THE FLEET. Installing the SSB has been so much work that Jim now refers to it as the SOB. There are five good reasons for choosing SOB, er, SSB, over other options such as a satellite phone:

1. We can talk for unlimited amounts of time with any other vessels anywhere in the world, so long as they also have their own SOBs (and as long as our batteries last)
2. We can contact shore stations, including mobile nets, businesses, and emergency services;
3. We can send and receive e-mail from sea (but it’s expensive); and
4. We can receive weather charts by connecting our laptop to the SOB.
5. This radio has all the Ham frequencies, too. 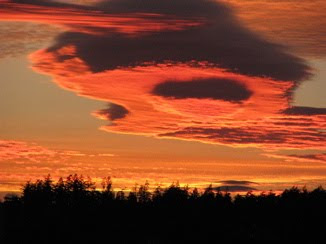 Sunset from our house, which we'll be renting to someone who hopefully loves them.

We’ve thought a lot about this. Some people have become so reliant on their electronics as a crutch that their voyages have been negatively affected, even aborted, when they couldn’t stay in touch with shore. We prefer to view having these electronics aboard as a convenience rather than a necessity. Cutting the umbilical with shore is important if you are going to truly go voyaging; but the ability to be in touch when needed is awfully nice. If we let electronics impact the quality of our voyage, or the connections we should feel from navigating by sun and stars, or the self-reliance of a fully-found little boat on a big ocean, then shame on us.

Since the boat will be our cruising home for the foreseeable future, she should be as safe, comfortable and convenient as possible. We’re not camping out; this will be a matter of taking our little home with us, like a turtle takes its shell, so that we can be at home anywhere in the world. Different philosophy there, but it has served us well in justifying going broke!

Spring Sailing Symposium in Port Townsend March 18-20, 2011
Last Sunday morning Karen’s phone rang. We’d say it was early but it wasn’t; we were sleeping late. She leaped out of bed, mumbled hello. It was Lin and Larry Pardey, calling from New Zealand! Karen's eyelids went from half mast to Defcon 4. The sailing world’s most well-known couple, who are among the star attractions at the upcoming sailing symposium in the Northwest Maritime Center here in PT, were responding in person to questions Karen had asked them via email. The conversation lasted an enjoyable half hour. Want to know what we talked about? Sign up for the symposium, (http://nwmaritime.org/symposium/) because Karen's presenting, too! In addition, we’ll bring Sockdolager to the docks at Point Hudson, and she’ll be open to tours for registered participants. Karen also interviewed Janna Cawrse Esary, author of The Motion of the Ocean, Gary (Cap’n Fatty) Goodlander, author of Red Sea Run, aboard Wild Card (currently in Turkey,) and Andrew Revkin, former Science Editor of the New York Times, blogger at DotEarth and a sailor who’s crossed the Indian Ocean and Red Sea.
Karen’s presentation is called “Hello World! Ten Reasons to Blog Your Voyage (but not every day)” 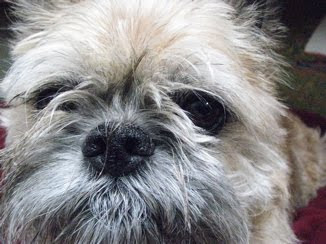 Postscript: A Hole in the Heart
This one’s difficult. At our last writing, Jack, our beloved little sea-doglet, was still with us. He died in August, a few days after we returned from the mini-voyage to Canada’s west coast. Congestive heart failure finally claimed him in the back yard early one misty morning, as we cradled him and told him we loved him and would carry him forever in our hearts. We carried him down to the boat and sewed a little shroud for him, made of a bright red beach towel with an anchor jauntily embroidered on it. We weighted it with a round rock from our garden and sailed him out to the mouth of Admiralty Inlet, to a place that’s 650 feet deep, beyond the reach of fisherfolk. We drifted in the mist, read some poems, squeaked his favorite toys, cried, and slipped him into the waves as a pair of tiny harbor porpoises circled the boat. It’s hard to write any more about the little bugger except that we miss him.

We’ll post again as the time nears and there is news.
Posted by Karen Sullivan and Jim Heumann at 6:42 PM 6 comments: