Ok, where were we?

Jim here. Skipping back in time, we sadly left Great Barrier Island on March 27th to head for the port of Tauranga from where we will ship Sockdolager to San Francisco Bay.  As we were sailing out of Port Fitzroy we heard someone calling us on the VHF radio; it was our friends on the sailboat "Legacy," whom we first met in the Tuamotus and who were just arriving. We found out they are heading for Tauranga too, so hopefully we'll see them there.

After a one night stop further south on Great Barrier, we continued to Great Mercury Island.  This meant leaving the protected waters of the Hauraki Gulf and venturing back out into the South Pacific ocean.  Luckily the seas were pretty calm, and we had a nice day cruising along under motor.

Great Mercury Island, at 5000 acres, is privately owned by two of the richest men in New Zealand, Michael Fay and David Richwhite.  They allow visitors to explore the island (except for their private compounds,) and also let folks use their moorings, which we took advantage of.


We were alerted to the availability of a mooring by a couple whom we got to know over the next several days - Jim and Gail Morgan, aboard a nice wooden motor yacht called "Big Spree".  Jim was a crayfisherman in the area starting in the 1970's and is now retired.  They also owned a sailboat for a several year and used it to go back and forth to Tonga and Fiji.  Their stories about learning to sail had us falling out of our seats.

They like to fish for (and eat) scallops now, and they took us out one day to show us how it's done.  Basically you dive down and pick them up off the sandy bottom.  They have a "hookah rig" - a compressor with a long hose. After 20 minutes of diving Jim came up with 73 scallops.  Yum.

Jim and Gail are also good at catching fish.  Truth be told I've had a hard time catching fish consistently in New Zealand, and so asked them to give me a lesson.  I found that it makes a big difference if you know what you're doing.  After the lesson I tried the new technique from Sockdolager (on the mooring in the bay) and caught four fish in four casts.  Eureka!

We had a big rain one night so I took the opportunity presented by a dinghy full of fresh water to take a bath.


After several days we were invited ashore to have tea with Michael Fay.  Jim and Gail used to work for him and had been telling him about our adventure, so he told them he wanted to meet us.  On Easter Sunday we got a tour of the compound and visited with Michael at his house.  He was the man who backed New Zealand's first America's Cup campaign in 1987 and was quite a charming host.

Too soon it was time to move on again.  We went around to what turned out to be one the most beautiful little bays on our whole trip.  I went snorkeling, probably for the last time.  And using my newly learned technique - caught more fish!


Part of our goal was to arrive in Tauranga with an empty fuel tank (so no fuel would be onboard while on the container ship).  But with no wind, it didn't look like we'd be able to make it without a fuel pit stop.  The little port of Whangamata, on the east side of the Coromandel Peninsula, was right on our way so that's where we headed.  Getting in there requires crossing a sand bar, which means it's really shallow.  You only go in when the tide is high and the swell is low.  We just made it, arriving at half-tide with just a hundred feet of water free of surf, and with a four knot current against us.  Karen got us in just fine, but it was a bit nerve-racking.  Later we took a walk to the beach and saw people surfing in the exact spot we'd sailed in several hours before.


The next day we motored to Tauranga, where we had another tricky entrance.  Not a bar this time, but another strong current exiting a big bay caused big seas.  More nervous energy expended.  We anchored for the night near the marina entrance in a continuing strong current, and the next morning were escorted by the marina's launch to our slip at slack tide.

A bright spot amongst the mixed feelings about the end of our sailing in foreign waters was  meeting up with Nick and Alex Kleeman from the boat "Saltbreaker".  These are a couple of brothers from San Francisco who took off around the same time we did, and have been having a lot of adventures in a way I think you must be young to have.  We'd last seen them in the Tuamotus.  Their mother was visiting and they'd just hauled their boat to do a bunch of work on it before deciding what to do next.  We had them over for dinner (to eat up the stock of fish left over from my last bout of fishing) and to play music and tell stories.

Speaking of music, while visiting the local Tauranga pub (the Crown and Badger) to hear a local band, Karen was invited on stage to join in on a couple of numbers.  She rocked the house with "Me and Bobby McGee."

After a week or so in Tauranga figuring out what to do with our last free month before having to haul Sockdolager and get her ready to ship, we took the bus to Auckland to pick a rental car to start a month of exploring on land.

Posted by Karen Sullivan and Jim Heumann at 10:18 PM 2 comments:


We are south of the 46th parallel, almost as far south as our home is north.  It’s blowing 35-40 here in the "Roaring 40s."  Huge seas are crashing, the temperature has dropped into the high 40s, and we are safe and sound in a motel in the village of Oban on Stewart Island, not too far from the southernmost pub on the planet, unless you count whatever they might have on Antarctica. Sockdolager is safely tied up at a marina in the Bay of Plenty.  There is a lot of catching up to do, and we promise a nice long blog post soon.  But we wanted to let you know all is well.  Tomorrow we re-cross the Foveaux Strait back to Bluff, NZ, by ferry.
Posted by Karen Sullivan and Jim Heumann at 11:30 PM 2 comments:

We're on our way to Tauranga in New Zealand's Bay of Plenty.  The weather has been great, but the wind will turn against us tomorrow, so we have been making tracks.  Just left the hair-raising entrance to Whangamata Harbor behind, whew.  Surf, rocks, heavy current, the woiks.  Now we are at sea in a nice long ground swell.  Will post more about Great Mercury Island and this part of the journey later, but meanwhile, a belated April Fool's theme post:

The array of perceptions that people have about sailing is a rather burning issue, that is, if you know someone who is out there or are out there yourself.  Our friend Cap'n Fatty Goodlander posted a meme on his Facebook page about perceptions of sailing, and we thought it would be a good time to address this topic ourselves.  There are so many perceptions; where does one start? 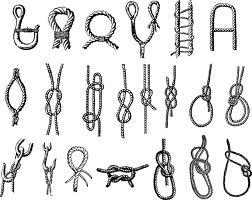 What brand-new boat owners after their first outing probably think sailing is: 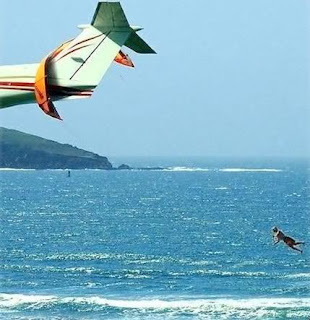 What yacht brokers would like you to think sailing is: What sailors outfitting their boats think sailing is: 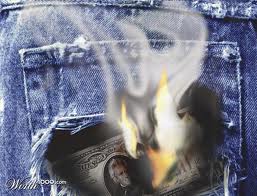 What a few of our jollier blog readers think sailing is: 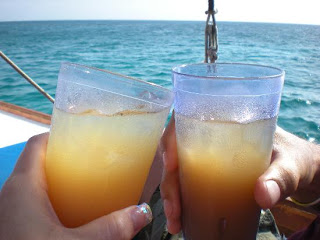 What some of our non-sailing friends think sailing is: 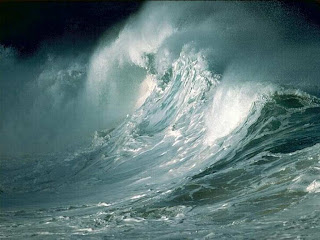 What some of our family members back home think sailing is: 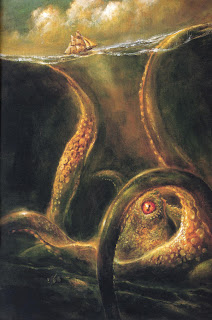 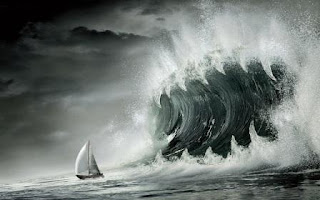 What we would love to think more of sailing is: 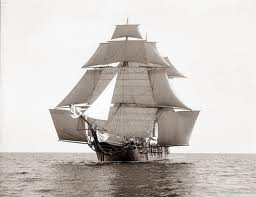 What sailing really is: 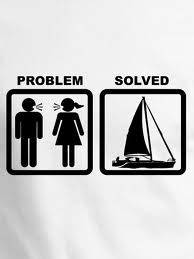 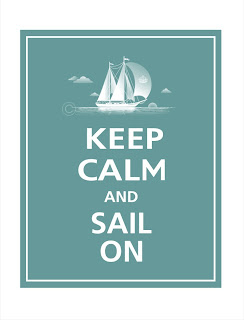 Posted by Karen Sullivan and Jim Heumann at 3:05 PM 2 comments: