Have Boat, Will Sail 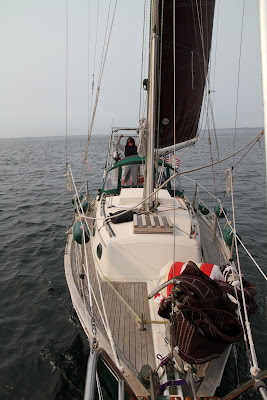 Northwest Mantra--Repeat until July: The Sun is not a myth... the Sun is not a myth... Not even the coldest spring on record since the 1950s is going to keep us from getting ready on time, but it has made preparation a bit more challenging. Doing upside-down boat yoga in a cockpit locker, for instance, is more fun in sunshine than sleet. Trying to not poke a ladder through a garage window is much easier when it’s not blowing a gale. Click here for scientific proof that Spring in the Northwest has been “unstable.” 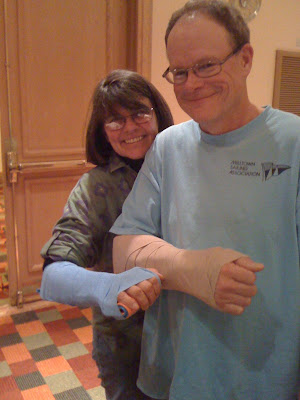 Something about juggling all those lists: We keep forgetting things. It couldn’t be age causing this, or even keeping track of unfinished work, so it must be the cold. Yep, that’s it. Karen, for example, completely forgot that Jim had made her a nicely shaped piece of wood to fill in a space between exterior wall shingles and the garage door frame, so she laboriously cut little mini-shinglets to fill it in and layered them carefully, then joined their edges to full-sized shingles. Nice corner, the renters will like it. Very fine work there, she thought, until Jim asked, “Geez, aren’t you going to use that piece of wood I made?” Cue sound of extra energy going THUD. 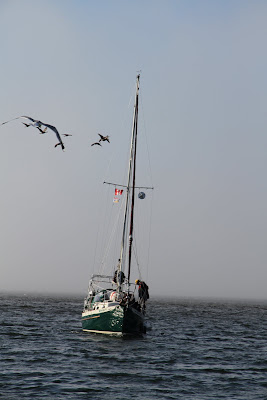 One of our favorite photos, taken last summer by Mae Jong-Bowles of Prince Rupert, Canada as we were entering Port Angeles Harbor from Sooke, BC.

But Jim takes the cake on forgetting, at least this time. He lost his wallet. Actually, he loses it rather creatively nearly every day, plus his car keys and glasses. Eons ago Karen offered him a basket for stashing them the minute he comes in the door, but nooooo... “Where’s the fun in that?” he retorted. Usually we (note the pronoun) find them all after a daily ritual resembling an Easter egg hunt. But one day his wallet seemed lost for good. The signs are always clear: Jim mutters while rifling through stuff and wandering distractedly. After ten minutes of this, Karen asks, “Which one are we looking for today?” Occasionally Jim will call out something like, “If you TRULY cared about me, you would know where I left my wallet/keys/iPhone.” This turned into the best setup he ever gave her. Meanwhile, there was no finding the wallet, and Karen silently began making plans to call credit card companies. She did notice a wallet-shaped bulge in Jim’s jeans pocket earlier, but thought, Nah, couldn’t be, he’s not THAT clueless. But he was. “I found my wallet!” came the triumphant call minutes later. Silence.
Karen: Where was it?

Jim: In my pocket.

Karen: No, seriously, where was it? (She walks over, begins searching his pockets slooooowly.)

Jim: What are you doing? I have to go to work!

Karen: I’m showing you how much I truly care. 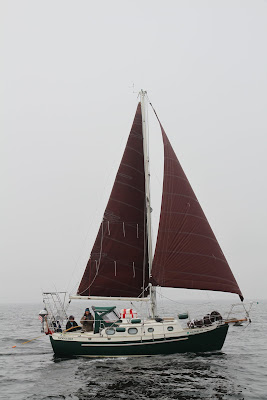 Of course, Jim had a good excuse for such forgetfulness: all his brain cell were full, holding an encyclopedic amount of arcane facts needed to pass the test for a General Class Ham license. No room left in there for mundane things like wallets. His study marathon began right after we returned from taking the Offshore Emergency Medicine course. The man’s unstoppable. Karen is still trying to keep all the medical stuff from falling out of her beleaguered brain.
Time to go sailing. The day cannot come soon enough when we’re on the boat and don’t need to take tests or remember where we put keys because we won’t need the dadgum keys. Wallets and glasses will be easy to find because on this boat anything you don’t put away is in plain sight.

More on the Emergency Offshore Medicine course: First we read the 200+ page book to get ready. Then we took an online test and passed. Then we flew to Denver, where we had three nine-hour days of intensive classroom time, which included how to identify if something’s a medical emergency or not, what to do about it, and how to keep something minor from becoming major. We role-played, diagnosed using “big net” systems thinking, and even practiced emergency radio calls. Then there were the labs, hoo boy... we cleaned, irrigated and dressed a horrendous wound in a ham hock, practiced giving shots with real syringes and real drugs except that we shot up a bunch of raw chicken legs and not each other, administered a hematoma block in another unfortunate chicken leg, and smeared fake blood on ourselves before going out to lay in various pained poses in the hotel hallway, which impressed the hotel’s other guests to no end.

This course was taught with panache and humor by Jeff Isaacs and a partnership of MDs who get what it means to go offshore by sailboat. If you are going offshore and beyond the reach of medical assistance or timely medevac, then this is the course for you. It costs about the same as two month’s insurance premiums and buys peace of mind. We’ve connected the Docs with the Northwest Maritime Center in hopes they’ll bring it here, because Denver’s as far west as they’ve taught it so far. You can find out more about it here. 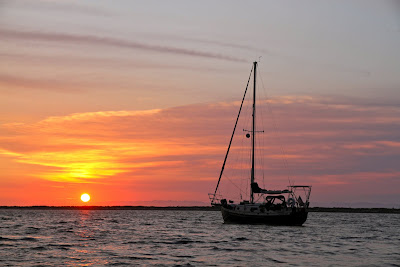 Posted by Karen Sullivan and Jim Heumann at 9:51 AM