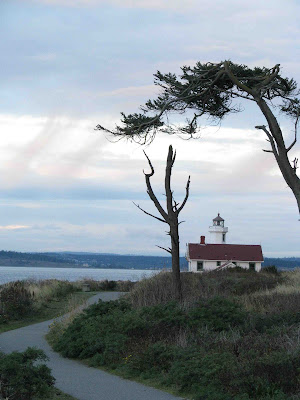 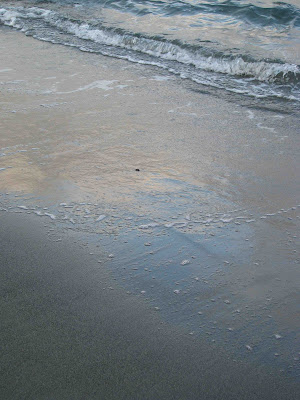 From the moment I first saw your name on a map more than a decade ago, the laws of attraction made it inevitable that we would meet.  Jutting into the sea with your jaunty but mannerly chin, you were all salt air and seagull cries and history. 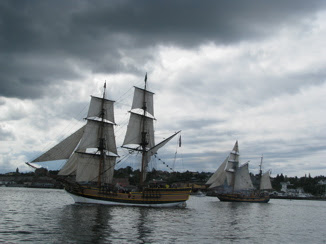 Battle sail:  Lady Washington and Hawaiian Chieftain duke it out with cannons in Port Townsend Bay.

Photos of you tantalized.  Those ornate waterfront buildings, the massive wooden piers whispering of tall ships that once carried exotic cargoes from the Orient, the twin forests of wooden masts in your two harbors, and those tidy uptown streets lined with Victorian architectural finery, ahh... it was like catnip to a sailor in search of a home.  But I prepared myself for the inevitable disappointment found in so many other seaside towns: that all this visual beauty might mean you were just another nostalgic daguerrotype. 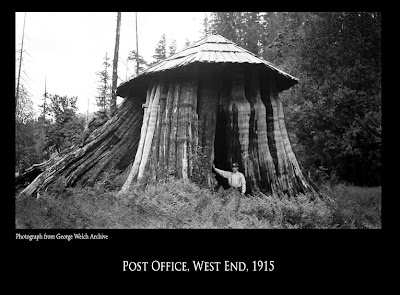 From the Jefferson County Historical Society. 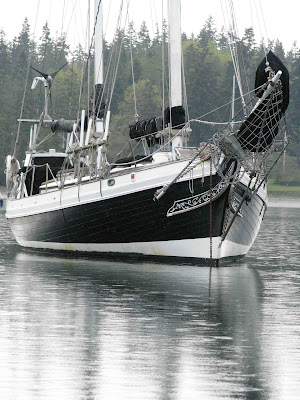 Schooner at anchor. Lots of rain, lots of reflection, and lots of history in the Northwest


I’d half-figured you for one of those relics that got turned into a caricature, the kind that pops open like a tulip in late spring and withers to a silent grey vigil at the autumn departure of lifeblood tourists.  A seasonal flash in the pan.  How wrong I was about how alive you are, Port Townsend. 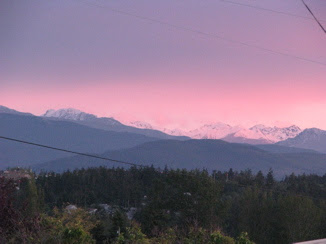 Sunset over the Olympics from our house. 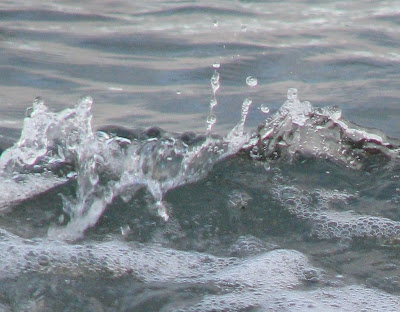 The rhythm of the tides will whisper if you listen.

The first time we met was during the 1998 Wooden Boat Festival, that siren gathering of shapely wooden hulls dressed in gleaming varnish and the finest Stockholm tarry rigging.  You snagged me then, Port Townsend. 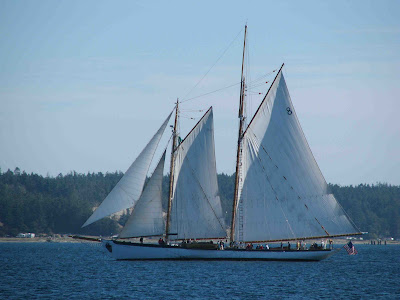 I’d fly down from Alaska every year after that for my annual big gulp of sailing camaraderie, knowledge, singing, sharing, gawking, and yes, drooling over all that varnish.  I was repeatedly astounded that such a thing as this festival existed; it was almost too good to be true.  After each festival I’d fly back to the land of snow and ice, sated and happy, but hungry for more, aware that Alaska was perhaps not the best choice for practicing a summer sport.  Compared to Alaska, Port Townsend felt semitropical.  Still, I would not have traded sailing those brief bright Prince William Sound summers of rumbling aquatint glaciers, where whales were a common sight. 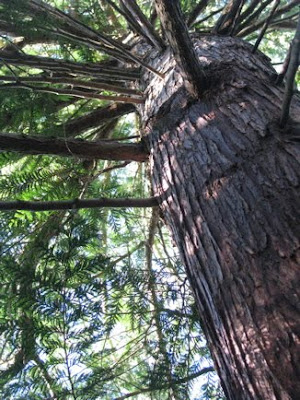 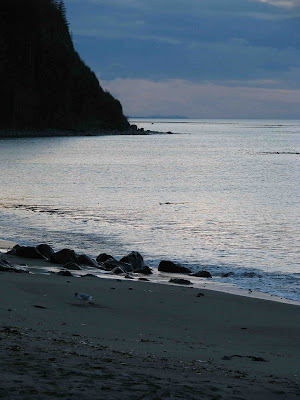 An October sunset in Port Townsend.


One September day whose exact date is lost to memory, I pulled myself away from the Wooden Boat Festival’s hullabaloo and walked up the hill to see what you were really like.  Seriously--could something this jolly, this beautiful, be real? 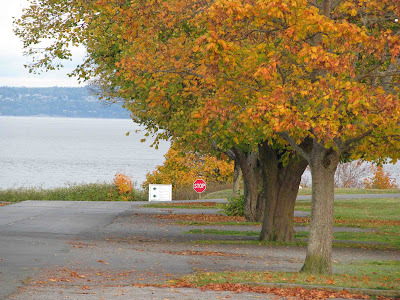 Strolling, I discovered much:  that bike lanes and sidewalks grace many roads, that the speed limit throughout town is a sedate 25, that these homes are lived in and cherished year round, that driveways contain far more old pickups and Subarus than Mercedes, and that the thriving stores frequented by locals have bulletin boards advertising dozens of interesting events stretching well past tourist season.  I discovered a bustling farmer’s market, an exceptionally busy library, and a community of writers and artists who actually support and like each other. 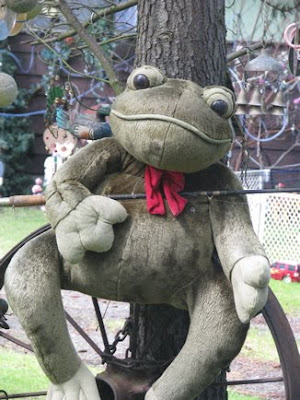 Part of a neighbor's whimsical yard.

I discovered a steady stream of every kind of music or dance event a body could want, even a kinetic sculpture race, for heaven’s sake!  There’s a vibrant populace living amidst all this history and beauty; the kind of people who are more interested in community than status.  Best of all, it goes on year-round.  Wow!  Port Townsend, I think I’m in love.  Early signs:  combing the real estate listings on weekends back home and making excuses to Alaskan friends--uh, well, it’s just to get a sense of the market, you know, not to actually buy a house. 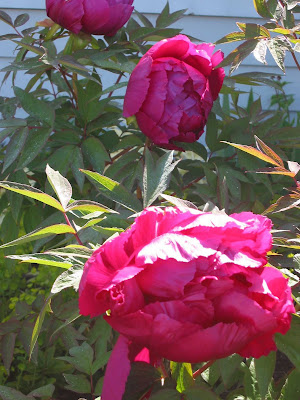 But one year the B&B I normally stayed at during the Wooden Boat Festival was booked.  Sailing friends from Alaska recommended another place, further away from the festival, but a lovely Victorian home with equally fine hosts.  The view from my turret-windowed room included a residential street, and down it I could see a most adorable little cottage with a big porch.  That’s the kind of house I’d like to find, I thought.  Sweet, small, and full of personality.  Ah, well, maybe some day.

The owners of a huge Chinese junk on exhibit at the Wooden Boat Festival were also staying there.  Over breakfast they invited me to sail back to Portland with them, and they were leaving tomorrow.  I found myself caught between the wild urge to chuck the job and go to sea, and the responsibility of not abandoning a staff retreat I’d organized back at work.  Responsibility won, but its grip was slipping.

Back in Alaska and shivering through another endless minus twenty winter, I combed the real estate listings, and there it was:  For sale, the little cottage I’d seen from my B&B window.  Not cheap, but not out of reach, either.  Over a hundred years old, in good but not great shape.  I gulped and bought it.  Six months later I chucked the job and moved to Port Townsend, but there was the matter of getting my 24-foot sailboat from Seward, Alaska to my new home. 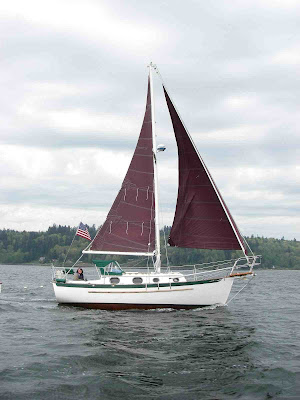 Karen sailed her own Dana 24, Minstrel, to Alaska in 2001 and to Port Townsend in 2006.  In 2010 she sold Minstrel and Jim sold his cabin in Colorado.  One house and one boat are best for two people.

I sailed all that summer, 1500 miles’ worth, and discovered on arrival that whales are not uncommon around here, either.  Arriving just in time for the 2006 Wooden Boat Festival, I walked in, joyfully greeting new friends from previous years, and thinking, you’re a local now.  Over the past six years I, and more recently Jim and I, have repaired and improved the little cottage.  We’ve grown very attached to this little town with its hopes and dreams and problems and accomplishments.  And now we’re leaving.  The house will be in the care of a property manager who will rent it, the boat is ready, and it’s time. 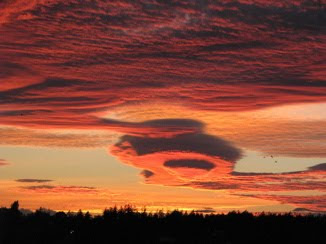 The most spectacular sunset ever.  Photo taken from the front porch.


We’re not leaving you forever!  Port Townsend, I love you--we love you.  But the dream calls, the lifelong dream of sailing out to see the world.  Jim shares that dream.  I have saved all my life for this, and it’s time.  Finally, the stars have aligned:  Jim and I have become a sailing team, with enough skills and a small but sturdy and seaworthy boat to give it our best try.  We’re not getting any younger, so we’d better do it now.  So we’re sailing away from you for a time, to cross the Pacific and see the world, for as long as it’s fun.  And then we’ll be back to live out our dotage, whatever that is.  Can’t think of a better community in which to do some dotage.  Port Townsend, I’ll pine for you, dear one, but we’ll keep in touch and we WILL return, to the best adopted home town two sailors could ever want. 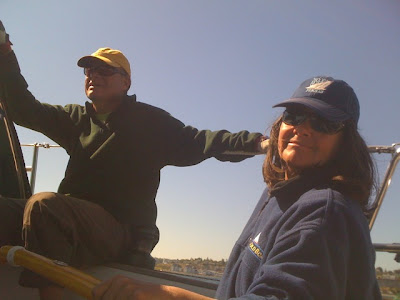 “No one realizes how beautiful it is to travel until he comes home and rests his head on his old, familiar pillow.”  - Lin Yutang